Greetings friends, in Jesus mighty name and in case you didn’t know it, cessationist fundamentalism is dead religion. Jesus is healing and doing many miracles thru several ministries I know of and there’s no lack of them, Katheryn Krick in LA, Jennifer Martin in Tennessee, NW Georgia revival, Liberty at Spirit Move Ministry, Chris Reed at Morning Star. God is doing great things.

Well, God has given me no lack of signs this month. I am amazed of them. Oh let me tell you. 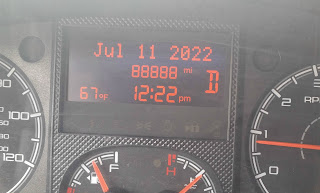 Then I bought materials for highway signs and made 7 of them to see what that would do, but on the eve of July 13, God was telling me and repeated in my mouth and head, “The mission is over.” At that same time, I move my van and the time was 7:11 pm at 70 degrees. I took note of those 7s of completion and fullness and then, once I moved my van, I continued in prayer, minutes later, thinking of the 5 year anniversary of the Yom Kippur Dream (coming up on July 14th) kicking off this 5 year journey, I randomly turned on the TV and I was flabbergasted by what I just saw. It was already on the right channel and I turned it on right at the start of the old Star Trek intro and it said this… “These are the voyages of the Starship Enterprise. ITS 5 YEAR MISSION, is to explore strange new worlds, to seek out new life and new civilizations, to boldly go where no man has gone before…..LOL… talk about rhema word, how much more does God have to say on that? So with the seven # signs and with this, I knew, this was God telling me, this phase of this 5 year journey of baring witness to California is over. But that’s not all.

The next day, I took those seven, 911quake.com signs I had made and began to post them, since I already made them. One of the last addresses I went to, “random” popped up on google earth as a 911 address. After that I went to one last address and upon arriving back to my van from that final 911quake.com promo, the time read 9:11 am. This finished the very final 911quake word to the Bay Area. Then I headed towards my first stop home, Santa Barbara.

These are just a few of the number signs I’ve had these last few days and God has given me even more, baring witness and testifying of this 911quake message to California.

I believe this is also a part of that 60 day notice I’ve been warning about, to the tsunami. Youtube video on this is up with 8 signs of it here. With those signs on 7/13-14 (the 60 day notice) and because it is also the 5 year anniversary of the California Yom Kippur dream, I believe this marks the 60 day notice to tsunami,  but also, there was, like the 90 day notice, a fresh noticeable 24 year crash of the yen that day too, like shown in the charts below.

June 16 edit -  It has also been reported that Japan has had a sudden surge in CV cases. Based on the numbers from worldometers.info, this new sudden surge of CV centered around June 14th, with it's surge of new cases peaking on that day, tapering off the day after, as shown in the chart below. 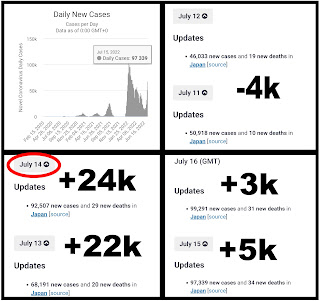 With this multitude of signs compiled, I believe we have our 60 day notice. Friends, that's 5 marks to the 60 day notice!  Next up, is the 30 day notice, at or close to August 13, to watch for. Its also  interesting to me that 7,000 fliers on 7/7 above, marks the 90 day to October 5th Yom Kippur, the date of the mega quake shown to me in the California Yom Kippur dream.

I don’t know if you’ve been following my prophetic super bowl blog, but I believe God speaks thru sporting events to paint prophetic pictures and it’s been 21 years (777) since the Colorado Avalanche had won the Stanley Cup. I think Avalanche is the perfect word to describe what’s coming soon, the dollar crash, the tsunami and mega quake with mega supply chain disruptions and economic upheaval.

On July 3rd, I woke up to a strange message in my mind.... "The death of June Carter.".... I was asking who in the world is June Carter? Is that Jimmy Carters wife?

The month of June has just ended, so I thought, is this the last June as we know her? So I Googled "June Carter"..... turns out, it's "June Carter Cash" .... the end of Cash as we know it is upon us.... the death of JC Cash is coming.... it is prophesied from Chris Reed's $50 bill torn dream, that a new digital currency is coming, after the 50% collapse of the dollar. His dream had a man in black narrating to him in the dream. Johnny Cash is known as the man in black. June Carter Cash is his wife. This all ties together, telling to get ready for the financial upheaval coming.

Well, I lost a friend in this ministry. His doubts have lead him astray because suddenly,  he took a hard fundamentalist old testament view of prophecy and prophets. It amazes me that Christians would rather have a “thus saith the Lord” prophecy, with little real prophetic information to it, than prophetic dreams with much more prophetic information than the “thus saith the Lord” prophets, which is very rare that they ever give timing to prophecy, which is quite necessary if we are to prep in time. This friend was boasting of a prophet who foretold Trump would be president, but when I confronted him, from the prophet’s own writings that Trump would continue to be our president, he didn’t want to hear it and began to throw other arguments at me to deflect facing this point I made, that his beloved was not perfect. The trump-prophecy.blogspot.com vision told us Trump would be cut off, which was more accurate, even if Trump gets back in, in 2024. His wishful thinking has given him a false hope that America is going to be fine, with no WW3 in its future, as confirmed by many in signs, wonders, dreams and visions. It’s just like in January of 2021, when Christians were bashing me online for my trump-prophecy vision. They wanted to believe a lie so strong, that they would even bash a brother and never return to apologize. So unaccountable are so many Christians, but we must remember to be patient, God is still doing a work in them to bring them to the place of turning over every stone and leaving nothing without a critical thought to discern and search out. Presumption is one of the Christians worse enemies. It’s one of the most subtle deceptions of the mind because it's intermingle with faith, which sometimes, is not such an accuracy. Evidence is what backs faith, but sometimes Christians are not thoroughly investigating. Faith and presumption are a dangerous mix. We should be on guard to discern its often intermingling.

Well, Im hear near Santa Barbara and have decided, unless God shows me further, to stay put till near the end of July. I do not want to go back east, into the oven of the heat until I have to, so this will be a good season of prayer and seeking his face more for what come after, and to prepare for it.

Until then, I hope yall will check out that eightsigns video I recently made, as well as the currency crash video I made too, showing signs to start the later half of August for the announcement of the petroyuan, which is prophesied to have the shocking results of first, a 30% drop, then a 50% drop later, leading into a new currency. Store food and items you will need for the year. Supply disruptions are coming. Spend those dollars on useful items you will need before its purchasing power crashes.

Until I write, again, keep your joy alive. In the midst of darkness, God will be doing great things. Prepare to be a part of a newly birthed time of soul searching for the lost and to have our nets ready for when it comes. There is nothing more important discussed here, than that. In Christ, Weather