Greetings in the amazing name of Jesus Christ, supernaturally healing people world wide and well documented at messiahbalm.com . The whole wide world is without excuse.

Remember that e-letter from last month, I released on March 15th? How I described signs given of the currency trouble coming? Well 10 days later, a famous and quite anointed man of God by the name of Chris Reed, had a spectacular dream of all of this. In case you don’t know who Christ Reed is, he is like, the most anointed in the entire world with the gift of the word of knowledge. I’ve seen him live doing ministry. His Holy Spirit anointing calls out peoples names, addresses, dates of birth, relatives names, occupations, and troubles people have. He has quite a fascinating Holy Spirit gift.

Well, in this dream he dreamt on March 25th, he saw a 50 dollar bill being ripped by a third.

Then he saw another tare out of the dollar, so that only half of it was left. Upon that tare, there was an earthquake, then he saw a headline that read “Israel Palestine 2 state solution reached.” Right after that headline, another headline came “Major quake hits middle of America.”

Friends, from last month’s news letter, it shows 2 signs this will begin in August, so we need to prepare to store food, and use up our paper money supply in things we are going to need before it looses 30%, then goes down to 50%, when the quakes hit or be invested in gold and silver so it won’t loose it’s purchasing power.

This confirmation from Chris Reed of what is soon to come, is quite the backing to take this prophetic word serious and begin to start prepping now!

I believe soon after that middle east china oil deal, then we see the tsunami from Japan, which weeks later, will be that 1st quake Christ Reed saw in his dream. If I’m right, it’s all going to happen very fast, between August and October.

Did you see that Putin has now backed the ruble with gold? Well, it’s a pseudo backing. No one can actually go and cash in rubles for gold, but it has Europe scrambling to figure out how they are going to get by without Russian oil. I think secretly, they will have to buy the Ruble instead of the us dollar, to pay for oil to keep afloat. Well, the day that announcement came out, that Putin is backing the Ruble with gold, was the 7 year anniversary of my God given dream, “The Dogs of Dollar Death.” What a sign! And in that dream shows the dollar going down, in phases, just like Chris Reed’s dream, an overnight devaluation from the China/ middle east oil deal, shown in the scissored cut of it from the dream and then a pounding down of the dollar from other troubles…. 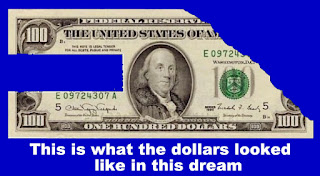 I may not have the picture from the dogs of dollar death dream exactly showing a 30% and then to 50% cut of it, like in Chris Reed’s dream, but it’s close. I find it fascinating that Putin’s price he put on the Ruble to gold makes the dollar 30% less, on the 7 year anniversary of this dream and also matching Chris Reed’s dream of a 30% drop in the dollar coming. Those are some pretty neeto matching prophetic signs/confirmations Lord. Also in my dogs of dollar death dream, the dollars sent back to me were from south east asia. Umm, isn't that where China is? And the dollars sent back to me cut up, were worth $3500. For years, I couldn't figure that part of the dream out. I think it's this. $3500 is half of $7000, seven being the number of fullness, so the dollar is cut in half, $3500 being half of the fullness, like in Chris Reed's dream, 50% drop coming. Just alotta eye opening synchronicity there.

I have transitioned this month from Southern California to Northern California and am here in San Jose California to continue on in this mission trip to warn people of what’s coming here in Sept/Oct. I will continue here till August to warn the people. I also discovered that I am getting more people paying attention who are college age, not the cynical 30-60 year olds. I was going to Costcos and Walmarts a lot in So Cal, flyering cars of the tsunami/earthquake message, till last month, when began going to colleges and am getting much better results in people visiting the web site and getting the vital info. At least I know they are paying attention and once this generation sees this sign come to pass, they will believe and come to the saving knowledge of Jesus Christ. Halleluyah! The seed I’m sowing today is going to reap a huge harvest of people awakening to the saving power of Jesus Christ. Please pray for my protection and for people to awaken from this prophetic word being given.

I’m in my fifties and my body is feeling the effects of many miles a day walking and fliyering cars. I am wanting God to proving me the money for an electric scooter. I already have the money, but I want him to make room in my budget so I don’t have to take from other areas of giving and investing. No I'm not soliciting donations and don’t anyone send me anything. I’ll do this myself, with God’s grace. I’m just telling you what’s going on with me and I think I can reach a lot more people with an electric scooter, instead of time and energy waisted in some of my more difficult challenges in sufficiently accessing college areas.

My Van I am living out of is doing great. No problems and am thankful for it’s nice RV finish buildout I did on it back in 2018/19 in prepping for this very ministry of this prophetic word I’m doing right now.

The weather out here is amazing, nice and moderate and the air is dry and light, unlike back east, with it’s extremes, speaking of which, the heartland is getting pummeled by tornados and storms and floods. Thank God Jesus is coming soon and is going to end all that, but right before he comes, its gonna get a lot worse. We shouldn’t worry if you or I might die before he comes. It might be so bad, that we may not want to live thru all of that, but this is a once in an eternal chance to make a difference in the lives of people before its too late to be that. We are truly living in a great time to be alive and see a massive end time harvest awakening coming. This is what tribulation does. It wakes people up to see what’s really important and most important, God and his kingdom to come to end this mess down here, so be encouraged and prepare to make an eternal difference in the lives of people you meet in that tribulation, that they would see your peace in the midst of the storm and want more of him living in you. Until the next news letter, pray for this ministry and God’s hand to be strong upon it. Yes, please pray pray pray for this ministry and for God to lead me to those who can be awoken.