Greetings friends, in the amazing name of Jesus Christ.

A truly incredible prophetic sign was given to me just a few weeks ago. At that time I was house sitting for a friend who has a home in the woods of the mountains of North Carolina. One day while house sitting, God was telling me the 522 mb sign cleared from my phone (1 of the 8 signs in the California Yom Kippur mega quake dream) is not just in reference to the year 2022, but was pointing to the date given in the dream, October 5, that it’s 5.22 years. Boy, did that provoke my curiosity, so from there, I began to calculate what 5.22 years from that event, the 522 mb cleared from my phone, would be; if that 5.22 years into the future landed on October 5th, the date given in the dream. If it did, man o man, that would be an incredible God given pin point accuracy.

So I began to convert 5.22 years ahead thru the timeanddate.com site. To make a long story short, here is the chart below of it all (also at 2020squake.blogspot.com). 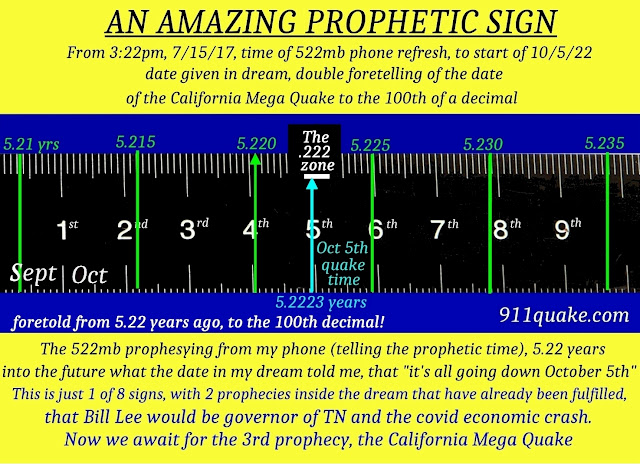 As you can see, because the fast reboot app doesn’t give to the hundredth decimal, 5.22 years ahead lands between October 4th to October 7th 2022, but because God has been speaking to me for years with the #22 and especial the #222 (in the free PDF book at 911quake.com), October 5th lands in the 5.222 range, an incredible synchronizing sign to me with the many other 222 signs. For God to get it down to the hundredth decimal, is a pretty incredible sign. The actual decimal to midnight October 5th is 5.2223

Another incredible sign synchronizing with that, I had was last month, when I went to visit a vineyard church. The Pastor’s sermon there was on “The Great Shakings.” He must have used the word shakings 70+ times in that sermon. Unbeknownst to me, I hit the record button on my phone to record that sermon at 11:11 AM. I unbeknownst decided to stop recording it at 22:37 long, but the video wound up being 22:38 long. Either way, if you convert 22:22 into a decimal, it comes to 22.37. If you convert 22:23 into a decimal its 22.38, coinciding with the 5.2223, to midnight October 5th, another pin point accuracy. This happened on September 12th, 2021. September 12th and 13th is special to me because I am on watch to see if the Japan tsunami hits at that time and have been given plenty of numerical synchronicity to that time to watch. September 12th/13th is also 22 days to October 5th. Also Sept 12 at 11:11 to October 5th at 9:11 is 22 days a 22 hours in between.

September 12th, 2022 is the day after the 21 year anniversary (777) of 911, and may be a time for the atonement from that to begin, which would be the tsunami, then leading weeks later into the mega quake. 911 has caused the lives of millions of people over seas to be destroyed in war and an atonement needs to be made. The US will pay a terrible price for it’s evil of dollar hegemony from that blood shed. God does not let innocent blood spilt go unpunished. An atonement needs to be paid back for that evil. For those of you who know the corrupt economic game that’s being played, you can understand this. For those who buy the ignorance of the media official story, you won’t.

These synchronicity of God moving me to have these signs, is quite fascinating to me.

Another set of number signs was when I was making my newest YouTube video on the 522 sign. As I was making that video I snapped a pic of my page of the list of dreams to put in the video and low and behold, it had 222 likes. Immediately upon finishing editing that video, I hopped in my van seat to go to do my first mailing of the California Yom Kippur book to the post office. The time read 11:11. I’ve had so many of these signs. I’m convinced the Holy Spirit is upon me to time me to these signs, often at specific events relating to the California mega quake.

I was chatting with a new friend the other day on some of these signs and told him, I feel a responsibility to go to California and warn the people. I’ve been given so many incredible signs on this with dreams and visions, and also from others, that I feel woe is me if I do not sound the trumpet on this. I told him, if it didn’t happen, and I’m deceived, well, at least I did the responsible thing and warned people, but I know what God has shown me and so, I’m going to California soon to warn the people. If it was just the mega quake with no early warning sign of tsunami coming weeks ahead, I could do nothing because who would believe, but because of the tsunami early warning sign, people getting that information, would convince them to evacuate by October, thus saving lives and in the process, winning souls. That tsunami from Japan is what to watch for and with these synchronicites, it appears to be September 12 or the 13 it may hit. I use soft language on that because I haven't been shown that directly in a dream with many signs following, like I was shown October 5th. Regardless, people getting the tsunami warning for September, will alert them to the mega quake coming weeks later, in October.

I am mailing out over 6 hundred copies of my free PDF book at the 911quake.com site, along with the cost of .98 stamps for them. This is money out of my own pocket and I receive no donations for anything I do on this. That, along with this tour to California I’m doing is going to cost out of my own pocket, close to ten grand and a lot of wear and tear on my van, as I proceed to travel all over California spreading the word. I am sufficiently equipped to do this job of a prophetic kingdom currier. My goal is to deliver also, a quarter of a million fliers throughout the state. I will be flyering cars, not people so much. If you’ve ever done track evangelism, this is by far, the best method of getting the word out to many more people. Some people will not take a flier hand out, but getting it into their car to take with them, is a great time for them to think of it as they are driving and later visit the web site, where they can download the early warning earthquake/tsunami alert app. Here is a copy of that flier. 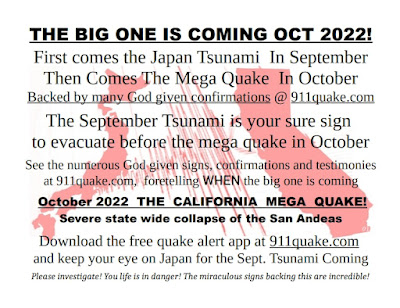 Until then, I am helping a house fellowship to expand a build out on their house and as soon as the trim out on that is done, I head to California. Above all things I need, please pray for my protection. This is most needed. The demons hold much jurisdiction in California because of sin, but God is faithful and I’m under his jurisdiction. Pray the enemy does not hinder or do me harm, for he does try, doesn’t he? Pray for angelic protection and Holy Spirit anointing and for me to be sensitive to his tugs and turns. Pray his church in California wakens to be ready to move. Pray for the Christian brethren in California. Our brothers and sisters in Christ need this word, so they would escape the destructions coming to ruin that place. They will suffer great loss, loosing their houses and many jobs. Pray in the surrounding States, of Christians to be ready to receive these beloved. They will be mega quaked out of houses and infrastructure will be out for months if not longer.

Until next month, see you hear again. In Christ, Weather, 911quake.com